Listen to the album title track here – The Sky Is Yours

2014 is the 10th anniversary of the San Francisco based producers 40 Thieves releasing their first EP and now they come through with their debut album ‘The Sky Is Yours’ for Leng Records.

Over the years 40 Thieves have connected with likeminded labels including Rong Music and Permanent Vacation to release a small handful of original singles and EP’s. One in particular, 2008’s “Don’t Turn It Off,” caused such a commotion it wound up on a few dozen CD compilations and was voted Best of the Decade by Beatport in 2010. Over the next few years the Thieves had the chance to remix great artists including Kid Creole and the Coconuts, Gary ‘Chocolate Star’ Davis, Plastique De Reve, and Johnny Dynell.

Whether they’re creating cosmic odyssey soundscapes or lazy mutant house, 40 Thieves like to interweave live instrumentation with programmed electronics, their sound would be equally at home at the Mudd Club circa 1983 or in the headphones of an Ibiza beachgoer circa 2083. Whether slack or upbeat, 40 Thieves always aim for the head as well as the floor.

The Sky Is Yours will be released on two separate gatefold double LP’s each containing 10 tracks and a double CD with all 20 tracks. 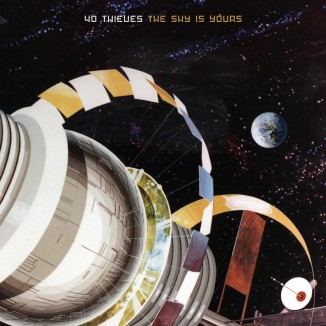